Accurate Diagnosis of a Difficult Target


“This was deemed a difficult case because of the location (LUL apical and medial), the size of the lung nodule (18mm), and no leading airway. [Furthermore, target motion was about 30mm].” 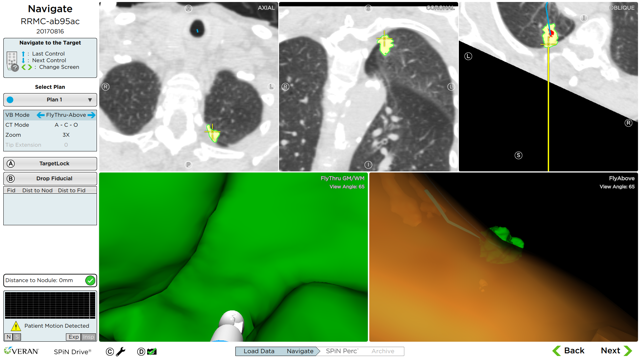 Patient History
This 79 year-old female had a history of heavy smoking and severe (end-stage) COPD (FEV1 47%, DLCO 15%). She presented with a left lower lobe pneumonic infiltrate, and a left upper lobe 18mm lung nodule. She was treated for pneumonia, with decrease in the size of the LLL infiltrate, but persistence of the LUL lung nodule. Given the patient’s severe COPD she was deemed inoperable, but tissue diagnosis was desirable for possible Stereotactic Body Radiation Therapy.

Planning
Using a same-day respiratory gated scan and the SPiN Planning® software, Dr. Urbina targeted an 18mm nodule located in the Apical Segment of the LUL. The morning of the procedure, the vPad® was placed on the patient’s chest and a 64 slice CT scan was performed using the Veran Gated Respiratory CT Scan Protocol. The nodule was very distal and no definite airway could be identified leading straight into the lesion, but several airways were identified using the SPiN Planning® software to map out these airways as close as possible to the nodule. This was deemed a difficult case because of the location (LUL apical and medial), the size of the lung nodule (18mm), and no leading airway. [Furthermore, target motion was about 30mm].

Procedure
Conventional video bronchoscopy was performed. The Veran SPiN Thoracic Navigation System® was then positioned, and the field generator placed over the patient’s anterior chest. After verifying registration with an Always-On Tip Tracked® instrument, the left upper lobe lesion was successfully reached after several attempts, and multiple transbronchial biopsies were performed. Veran’s respiratory gating technology was crucial in tracking the nodule movement between inspiration and expiration, and prevented biopsies which clearly would have been non-diagnostic from being done. Since there was no access to ROSE, the samples were sent to the lab for histologic examination, which revealed Adenocarcinoma. The patient was then referred to radiation oncology for treatment. 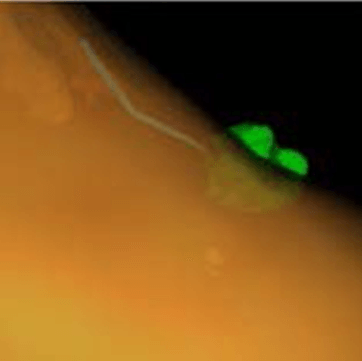 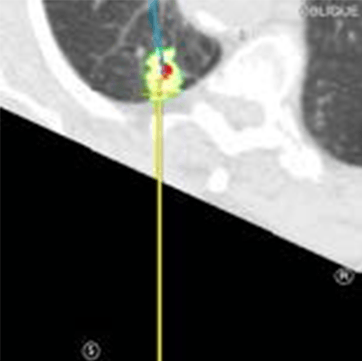