The Medical Center at Bowling Green


“The lesion was more than a 90 degree turn off the upper lobe takeoff and was through a couple other sub segments until you got right to the apex of the VERY top of the lung. We would have never gotten there, at least not in the time that we did, without the SPiN Access Catheter®. The SPiN Access Catheter® was instrumental in this case.”

Patient History
This 63-year-old-male with no cancer history presented a few months prior to his navigated bronchoscopy procedure with a pulmonary embolism and right upper lobe lung nodule which was being monitored by a community partner. In a repeat scan, the nodule showed growth leading his physicians to investigate with a PET scan. The PET CT showed increased uptake with central cavitation right at the pleural line. Noting the growth as well as a history of smoking, a navigated bronchoscopy was recommended.

Planning
Preparing for the navigated bronchoscopy, Dr. Steff’s patient underwent a same-day Respiratory Gated CT scan. He dropped an 8mm sphere over the patient’s 15mm lesion to mark his desired sampling location. Veran’s SPiN Planning® software allowed Dr. Steff to review his pathway through the upper lobe takeoff with a 90 degree turn to his target prior to the procedure and found the nodule was moving 13mm during respiration.

Procedure
Dr. Steff began the procedure with an automatic registration using the SPiN Drive® software. He began navigating to the apex of the right lung through the right upper lobe takeoff with the SPiN Access Catheter®. He was able to follow the system’s pathway to quickly make it to his target. With the catheter in place, Dr. Steff sampled his target with the Always-On Tip Tracked® serrated forceps as well as the tip-tracked 21ga needle to provide his pathology team with adequate tissue. He timed each biopsy with matched respiration since the target was moving a distance nearly its size. Pathology was able to determine the tissue samples were consistent with Non-Small Cell Lung Cancer. Dr. Steff staged the patient using EBUS in the same procedure to gather all the information needed for treatment of the condition. 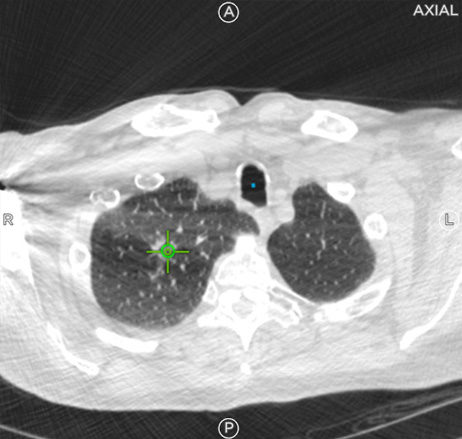 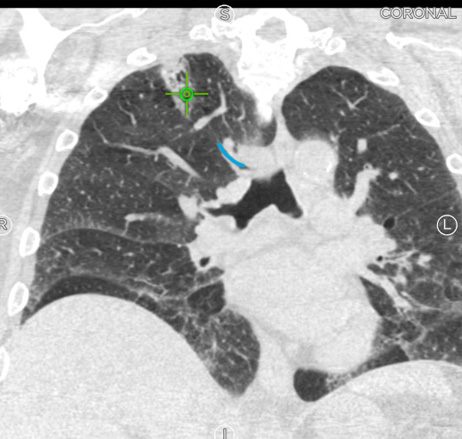 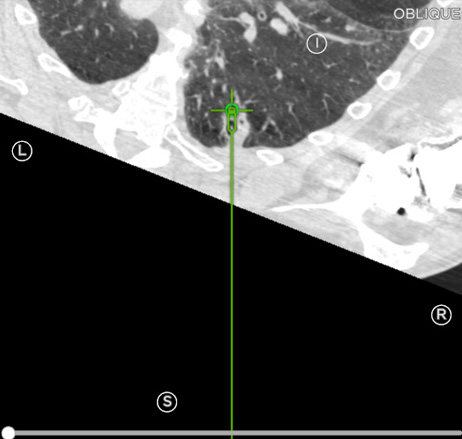