Prior Procedures: No diagnosis.
Veran pivotal to getting an answer.


“The patient had a lung mass that continued to increase in size. She was an active smoker whose risk for cancer was high. She had undergone multiple nondiagnostic procedures that utilized both CT-guided biopsy and superDimension™ navigation technology.” 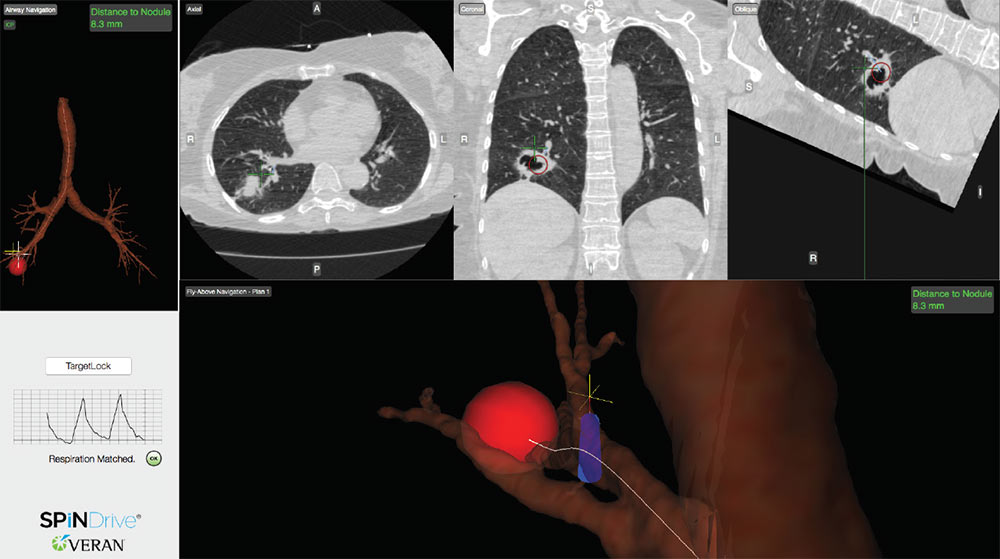 Patient History
The patient is a 63 year-old female, who had been smoking for over 50 years. This patient presented with a cavitary lesion in the RLL that was previously nondiagnostic from both a superDimension™ ENB procedure as well as a nondiagnostic CT-guided needle biopsy in IR. During the superDimension™ case, a needle, brush and forceps biopsy were gathered and radial EBUS was used to try to confirm guidance. Physicians took a CT-guided core biopsy of the right lower lobe and believed it was successful. However, pathology reported that the biopsy showed benign bronchial cells and macrophages. The next option was to perform a Navigated Bronchoscopy using Veran’s SPiN Thoracic Navigation System®.

Planning
The plan began by segmenting the RLL cavitary lesion. The lesion did not have a bronchus sign, so a pathway to the target was built. The best pathway to the lesion required burrowing through the bronchial epithelium wall to ensure a diagnosis. Once a pathway was created, a plan for SPiN Perc® was also made to provide a percutaneous option for the procedure. All obstacles and turns were identified in the process to plan for a smooth and efficient procedure.

Procedure
The Navigated Bronchoscopy began with a main carina verification using the Always-On Tip Tracked® serrated forceps. Using the serrated forceps, a tunnel into the center of the lesion was carved. Once a path was available, the 22g SPiN Flex® needle broke through the bronchial epithelium wall to penetrate into the cavity. A successful BAL was performed through the needle to clear the pus in the lesion. Additionally, FNA samples were taken. In room pathology called the presence of tumor cells. Final pathology confirmed squamous cell carcinoma. Because a diagnosis was obtained through the Navigated Bronchoscopy, the procedure was not transitioned to SPiN Perc®. The patient will undergo a lobectomy. 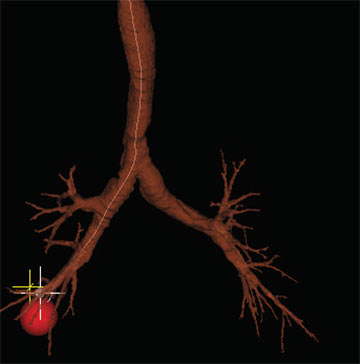 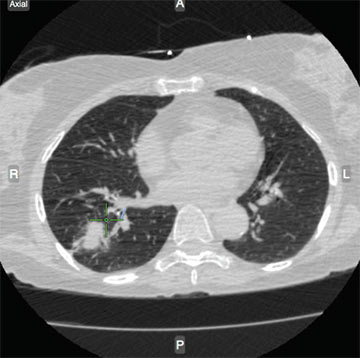 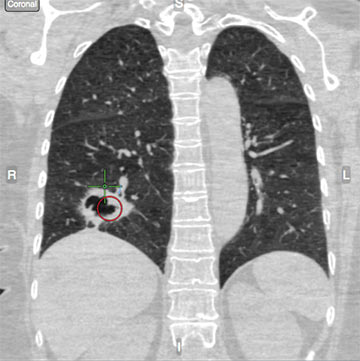